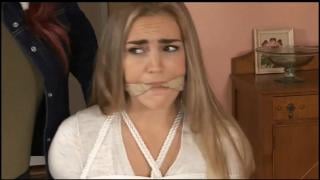 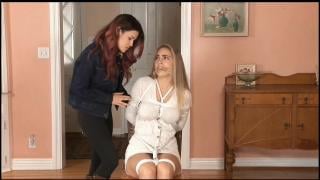 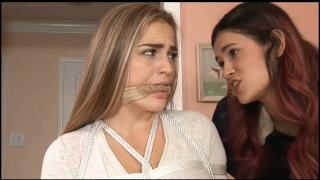 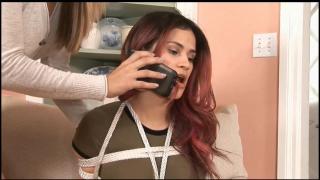 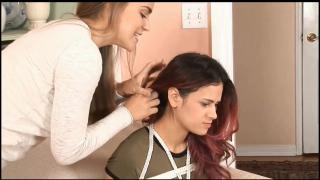 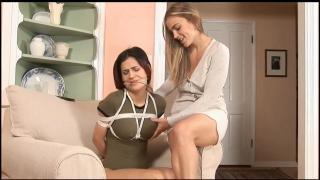 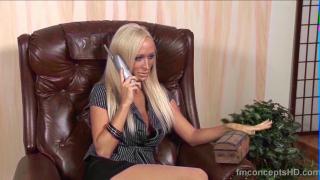 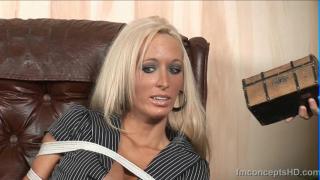 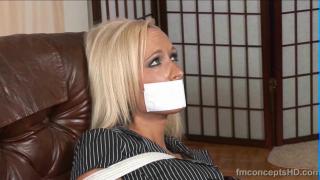 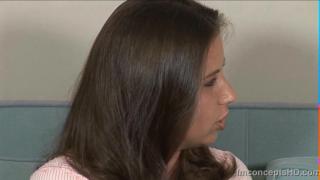 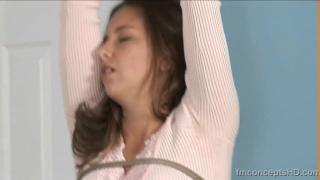 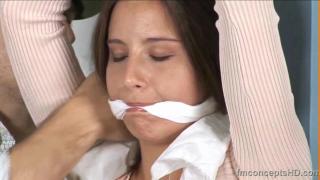 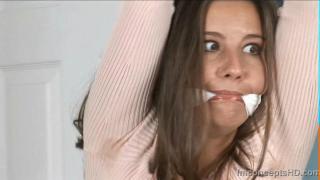 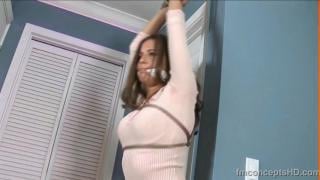 File size : 1214MB   Duration: 00:21:42   File format: MP4
ilovetape1991
Msg
Video
Photo
Block
Played - 144
viewed - 3670
It's never a good sign when someone's led into the room with ropes tight around her torso and a bag over her head! When the bag's removed to reveal the lovely face of Ryan Ryans, her anxious eyes wide above the knotted gag between her lips, it's clear that her escort Vanessa Veracruz is up to no good. Indeed, Ryan's being held in expectation of a profitable exchange and in the meantime, Vanessa's going to entertain herself at the bound beauty's expense! Soon Ryan's breasts have been bared and Vanessa eagerly fondles them as she squirms in the chair to which she's been roped. Next Ryan's shoes come off, so mischievous Vanessa can tickle her bare soles, then the lithe bad girl straddles her prey for some in-her-face nipple tweaking!

If sweet Ryan thinks Vanessa will get bored teasing her bound body, she's quickly disillusioned after her clothes are removed and she stands naked, trussed and tethered to a wooden cabinet! Ungagged for a moment, Ryan begs to be released but wicked Vanessa responds with a shiny red ball that she straps between the powerless girl's lips, then turns her eyes once more to that amazing bosom. In a few moments, Vanessa's attention -- and her hand -- wanders between Ryan's legs, where the creative villainess next locates a crotch-rope! Just in case her dominance isn't clear, Vanessa tugs on the annoying coil while slyly raising a boot over Ryan's vulnerable bare toes. Yes, the fiery-haired fury relishes the power she wields over the beautiful nude -- but power relations can be reversed in the blink of an eye!

Vanessa doesn't look nearly as tough once her boots and pants are removed and she sits bound and barefoot in a large armchair, while Ryan, back in her blouse and skirt, looms above her! Although Ryan knows it would be smart to call 911, she can't resist grabbing some payback at the not-so-tough chick's expense. So she orders Vanessa to call her partner and as soon as it's clear that he won't be back for at least an hour, it's showtime for Ryan! After gagging her, Ryan lifts Vanessa's petite bare feet into the air and inflicts some turnabout tickling on her quivering soles. Soon Vanessa's shirt is barely there and her rope- framed breasts are fair game for vengeful Ryan, but the once meek young wife is just getting started! A tape-gag replaces the stunned villainess's cleave and she's reversed in the armchair so that her round bare bottom is perfectly placed for spanking. Ryan can't deny herself the pleasure of giving those tiny wrinkled soles another fingernail salute and also treats Vanessa to a brief pussy massage!

Ryan amps up her humiliation of Vanessa by installing her naked on a dining table; the ball-gag she happily installed between her blonde plaything's lips now serves its purpose in her own mouth! After watching in satisfaction as Vanessa writhes, Ryan pays her final tribute to the subjugated gang-moll's breasts and feet, adds a nip on her nipple, then has the bright idea to spread her defeated enemy's legs by attaching her ankles to the table legs! Whimpering in embarrassment, Vanessa gets a last look at her nemesis when the bag Ryan once wore is placed over her head and she's left to struggle. An impressive reversal of fortune -- but reckless Ryan has spent too much time toying with Vanesssa, so she's about to join her in bondage!

Sorry, Ryan, you should have called for help when you had the chance! Now you're naked again, sitting with Vanessa on the floor like her bondage twin; her partner's annoyed with the way this whole scheme has disintegrated so he wasn't very polite when he stuffed cloth in your mouth and sealed it in place with duct-tape. But Vanessa didn't escape his ire as well, so she received the taut-rope-and-duct-tape treatment as well. Both of you are understandably anxious, so you turn your agitated emotions on each other with muffled epithets and angry stares; Vanessa's even pissed-off enough to maneuver menacingly close to you. But then, amazingly, you both have a change of heart when you realize that even a small chance of escape will require co-operation. Twisting back-to-back on your hips, you pluck feverishly but ineffectually at each other's bound wrists, an operation that ends abruptly when you're turned away and immobilized on your hips with waist-ankle tethers! Nothing to do now but huddle together like the friendly enemies you've become and hope that the good guys are on their way!
[Hidden text will display after purchase] 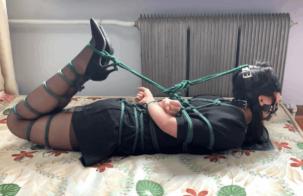 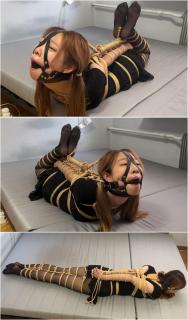 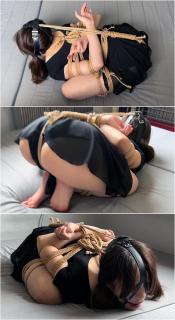 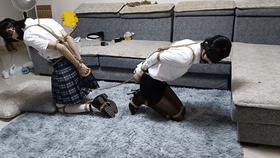